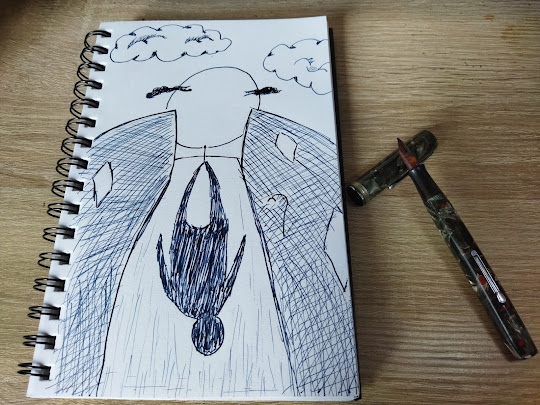 The pen
Information available on this pen is slightly confusing, with many authoritative sites stating data that contradicts with scanned copies of printed pen catalogs which I found. What I can say for sure is that this model appeared in Waterman's pen catalogs in the years 19331 and 19362, and was no longer listed in 1947.

One of the things that some sites seem to get confused about, is the believe that model "Lady Patricia" and model "94" are the same pens. In actual fact, the pens have different caps and lever designs, as seen in the catalogs.

Another item that is often confused about the pen, is the names of it's colors patterns. One of the most popular fountain pen online sellers, listed a pen for sale with similar pattern as "Steel Quartz", when the catalogs listed it as "Grey Chromium mountings" in 1933, and "94-G / Grey" in 1936.

The pen I used for this sketch was purchased as "user grade" (i.e. cosmetic issues, but working) with a loose cap and discolored manifold 14k nib. For those who have never heard the term before, a manifold nib is a "hard" nib which offers no flex, something which is not the normal in the era. Based on online discussions (taken with a generous pinch of salt), manifold nibs were used to write on carbon paper, for the writer to make copies of his/her writing.

The ink
Yes I hear your screams, modern iron gall ink in a vintage, what was I thinking. To be honest, I tested the ink in another ink sac fountain pen before and it survived without a scratch. To do this with pen killer inks (I'm looking at you baystate blue (╬ Ò ‸ Ó) ) is murder, do not try this at home.

The ESS registrar's ink writes with a sapphire blue which quickly oxides to a dark midnight blue. It's pretty feather-resistant, slightly bleed-resistant, and I've used it on cheap office papers for quick writing with good results.

As all iron gall inks, this ink dries with residue and requires extra care when used.

Drawing experience
For those taking the brave leap into vintage pens (i.e. any pen with a nib designed before ball points became popular), do note that writing styles and pen designs have changed greatly through the decades. One noticeable change is in the tipping of fountain pen nibs post-ball point era. Vintage nibs were designed to draw lines parallel and perpendicular to the nib face. Modern general purpose nibs, due to the influence of ball points, are often designed to draw in multiple directions. This vintage nib has that same design, and drawing with habits from modern nibs was a little vexing.

Using a manifold was good for the quick sketch, as I needed to worry less about pressure control, though the lack of line variation is painfully obvious. The nib dries quickly when used in a "wrong angle", and trying to maintain the angle at the nib's sweet spot was a huge reminder of how weak my basics are.

The nib felt coarse on the paper, due to the watery consistence of the ESS, this is a known issue to me, so it didn't bother me that much. As always, the ink dries quickly, and I had no issues with smudging.

Over all, the sketching experience was not as pleasant as some of my other pens (due to my own bad habits), will likely use this as a writing pen moving forward.

Posted by Enfeebler at 6:57 AM No comments:

While researching for another article, I came across a Wayback Machine archive of Waterman pen catalogs from 1885 to 1947. These are invaluable reference material if you are trying to understand the history of Waterman fountain pens, or trying to make an informed purchase on a vintage pen.

The archive can be found here:

Posted by Enfeebler at 4:59 AM No comments:

I was asked by members of SFPL to do a video of writing with a new novelty that I purchased from taobao recently, disappearing ink cartridges. Originally, these cartridges are meant to be used with indented copybooks that is becoming popular in China, which was why I bought them in the first place, but I'm sure our beloved members will find ways to get into trouble with them. Be safe people, don't get caught.. 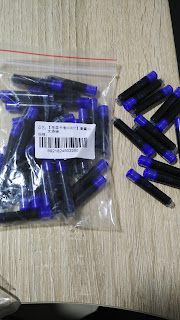 The cartridges come in pockets of 30, under 10 Singapore dollars but shipping is a killer. I shipped two packets on top of the copybooks I purchased, doubt I'll be buying them solo.

The pen used in the really poor quality video is a Daiso (4th generation) pen, the cartridge is an international short. As you can see from the video, the ink starts to fade almost immediately, it will probably not be the best thing to open bad checks with, but not too bad for practicing writing. I'll play with it a little more and update this post if I discover anything else worth noting about this cartridge.
Posted by Enfeebler at 6:11 AM No comments: 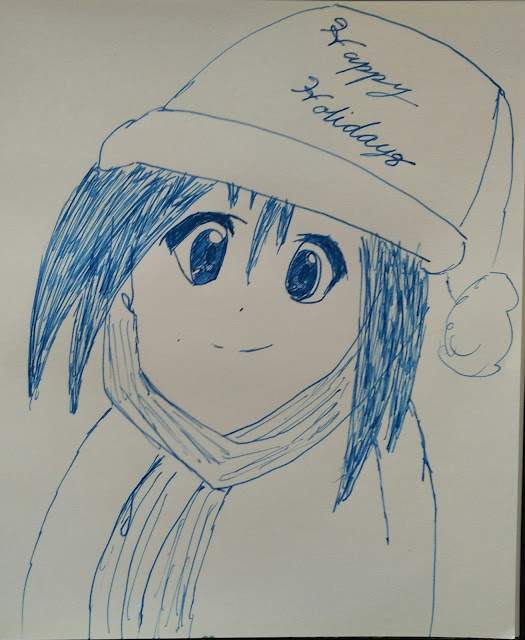 Posted by Enfeebler at 11:11 PM No comments:

Comparing a counterfeit Parker Sonnet to a real one

As the trend of fountain pen usage comes back in fashion, the rise in the number of counterfeit fountain pens occurs as well. For first time buyers, this can be a costly and embarrassing mistake, one which could be avoided by sharing information with fellow enthusiasts.

I have the unfortunate honor, of presenting first hand information on the subject with everyone. While searching for a good deal on fountain pens in Ebay, I came across a Parker Sonnet at a too-good-to-be-true price. Despite noticing that the seller is from China, I threw caution, and common sense, into the wind, bid for the pen, and won.

Went the pen arrived, it felt wrong right from the start. The weight of the pen was lighter than the rest of my Sonnets, and the material felt a little cheap. A closer look revealed workmanship errors which was uncharacteristic of the Parker Sonnets.

Here are some comparison photos to help fellow enthusiasts in identifying counterfeit Sonnets.

"Jewel" on top of the cap 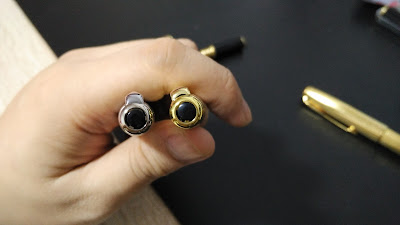 While the quality of lower end Parkers have been questionable these past few years, they have still maintained some standards in their mid and higher-end products. The plastic "Jewel" on the top of the Sonnet cap should appear center, as shown on the left, and not touching the edge like the counterfeit on the right.

The depth of the lines on the arrow clip 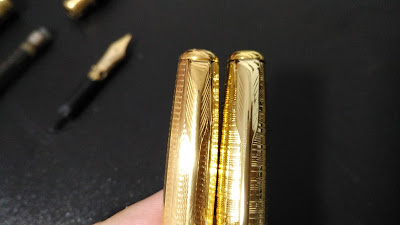 One of the things that eluded Parker counterfeiters, has been the "feather" lines on the Parker arrow clips. Most of the time, the lines will be too shallow or not clear enough on a counterfeit (as shown on the right), though this could be hard to detect without a comparison.

Length of the threads 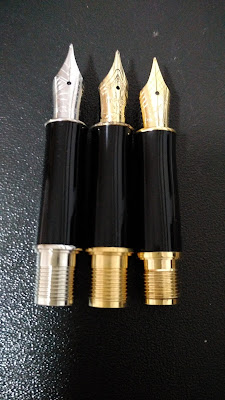 Small details, like thread count, isn't something most counterfeiters pay too much attention about. As shown on the right, this example of a counterfeit has a shorter thread than standard Sonnets, I have seen examples with longer thread counts in other Parker products. 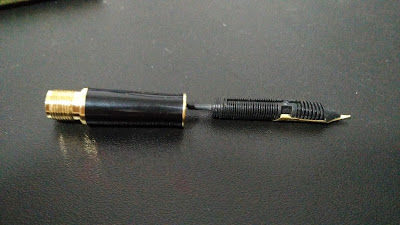 The thread count of feed to section is about 1 and a half turns on a standard Sonnet, but this counterfeit requires 3 full turns. 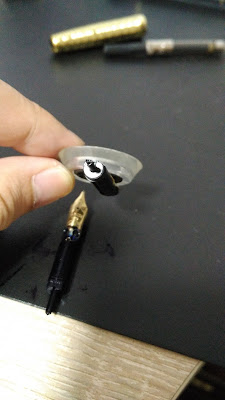 This is the first test which I use for any Parker pens which I have doubts on. Modern Parker nibs are made of a non-steel alloy and should not be attracted by a magnet. As you can see on the right, the "18k" nib is obviously not what it claims to be.

Do note that counterfeiters have caught on recently, and I have a counterfeit of a Parker IM which can pass this test (failed the previous test though). 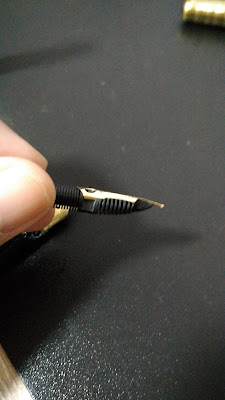 For the Sonnet, the nib of the pen is fastened onto the feed mechanically, and should be a secure, non-moving fit. This example of a counterfeit has a feed that moves away from the feed on slight pressure.


I have already raised a dispute on paypal for this counterfeit, and even if I don't get my money back, the price I paid for it is low enough to be an inexpensive "lesson fee". Good hunting!
Posted by Enfeebler at 11:32 AM No comments:

Hero against the World - Hero 336 vs Pilot U

If you have no idea what this series is about, please click here for a brief intro.

The challenger: Pre-owned Pilot U 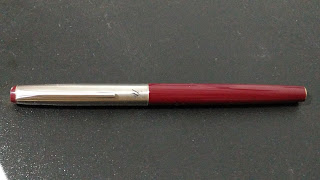 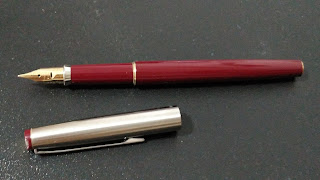 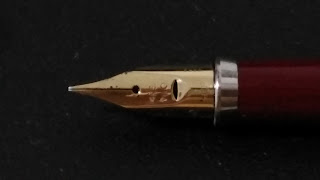 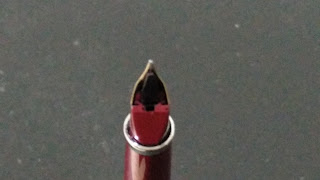 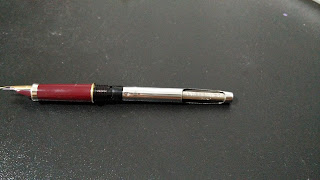 There is little information about this pen online, all that I was able to gather was:

The pen came with 14k 585 nib, and the older version of the Con-20. It writes like a F nib and has a unique feed which seem to be joined to the section.

Smoothness
I'm not sure if it is due to abuse from the previous owner or a design flaw, but somehow the Hero 336 nib feels smoother to write with compared to the Pilot U.

Ease of maintenance
With a removable converter, the Pilot U is a lot easier to clean and maintenance, compared to the Hero 336, where the plastic sac is glued directly onto the section.

Look & Feel
The Hero 336 looks and feels cheap, that has always been one of the main reasons why it has never been able to compete with more expensive pens, even though it is a decent writer.

Filling mechanism
Sometimes it is a lot easier to fill a removable converter like an eyedropper fountain pen, in this aspect, the Pilot U has a better filling system than the Hero 336

Ink flow
Hero 336s are notorious for the lack of QC, one of the more constant issues involves out-of-the-box ink flow problems, which requires some tuning before the pen is usable.

Hard Start
Again, the Pilot U has a hard start issue which I cannot determine, if it is due to abuse or design flaw.

Feedback
The Pilot U has a strong feedback when drawing across the nib. This could be due to the thin nibs which are not supported fully by the feed.

Availability
The Pilot U is no longer in production, and will take some effort to acquire. 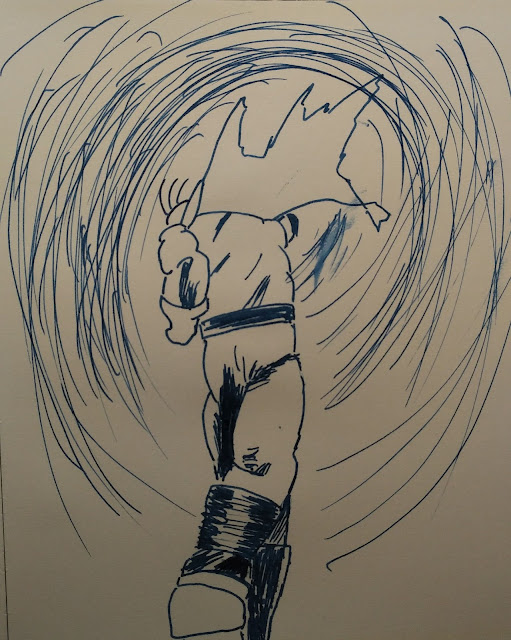 Posted by Enfeebler at 9:49 AM No comments:

Email ThisBlogThis!Share to TwitterShare to FacebookShare to Pinterest
Labels: 336, Hero, Hero against the World, Pilot, U

Hero against the World - My champion, the Hero 336 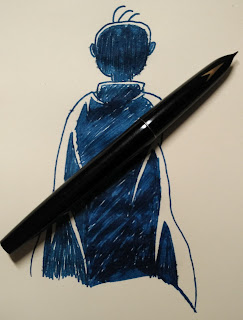 In my (very) few attempts to review fountain pens, I found that it was very difficult to gauge the degrees of differences on a single pen. There are no scales or standards to compare them too, and the only way for me to judge was how I was feeling about the pen that day.

To overcome this problem, I decided to use an inexpensive, widely available fountain pen to compare against the pens which I will be reviewing from this point. I chose the Hero 336 as it is still in production, cheap, and easily purchased over the counter or online.

Announcing the beginning of the "Hero against the World" series, your constructive comments are very much appreciated.
Posted by Enfeebler at 8:46 AM No comments:

If you wish to trade blog links or contact me on something of a similar nature, I can be reached at enfeeble.nyx at gmail.com
By spamming me at the above email with useless ads, scams, etc, you agree to pay me everything you own, including the pants you are wearing.